At ICML I recently published a paper that I somehow decided to title “A Divergence Bound for Hybrids of MCMC and Variational Inference and an Application to Langevin Dynamics and SGVI”. This paper gives one framework for building “hybrid” algorithms between Markov chain Monte Carlo (MCMC) and Variational inference (VI) algorithms. Then, it gives an example for particular algorithms, namely:

Is there a pleasing visualization?

(Admittedly, this might not make that much sense at this point.)

. Variational inference (VI) converts this problem into the minimization of the KL-divergence

for some simple class of distributions

is a mixture of two Gaussians (in red), and

is a single Gaussian (in blue), the VI optimization in one dimension would arrive at the solution below.

Given that same target distribution

. The random walk is carefully constructed so that if you run it a long time, the probability it will end up in any given state is proportional to

. You can picture it as follows.

Why would you want to interpolate between them?

In short, VI is only an approximate algorithm, but MCMC can be very slow. In practice, the difference can be enormous– MCMC may require many orders of magnitude more time just to equal the performance of VI. This presents a user with an awkward situation where if one chooses the best algorithm for each time horizon, there’s a “gap” between when VI finishes until and when MCMC is better. Informally, you can get performance that looks like this:

Intuitively, it seems like something better should be achievable at those intermediate times.

But they are so different. Is it even possible to combine them?

Put another way, both VI and MCMC seek “high probability” regions in

, but with different coverage strategies:

It is therefore natural to define a random walk over

, where we trade off between “how random” the walk is and “how much” high entropy

That’s fine intuition but how can you guarantee anything formally?

Yes! Or, at least, sort of. To define a bit of notation, we start with a fixed variational family

and a target distribution

. Now, we want to define a distribution

(so we can do a random walk) so that

The natural goal would be to minimize the KL-divergence

is defined by marginalizing

out– you can’t evaluate it. What you can do is set up two upper-bounds on this quantity.

The first bound is the conditional divergence:

The second bound is the joint divergence. You need to augment

and then you have the bound

Since these are both upper-bounds, a convex combination of them will also be. Thus, the goal is to find the distribution

What distribution optimizes that bound?

depends on the choice of

. You get a valid upper-bound for any choice, but the tightness changes. The paper uses

is a normalizing constant. Here, you can think of

as something akin to a “base measure”.

is restricted to beconstant over

. (This isn’t a terrible restriction– it essentially means that if

were a prior for

, it wouldn’t favor any point.)

Taking that choice of

the solution turns out to be:

Furthermore, the actual value of the divergence bound at the solution turns out to be just the normalizing constant

How would you apply this to real algorithms?

To do anything concrete, you need to look at a specific VI algorithm and a specific MCMC algorithm. The paper uses

To get the novel algorithm in this paper, all that really needs to be done is to apply Langevin dynamics to the distribution

derived above. Then, after a re-scaling, this becomes the new hybrid algorithm

is the entropy of

. This clearly becomes the previous VI algorithm in the limit of

. It also essentially becomes Langevin with

. That’s because the distribution

(not yet defined!) will prefer

is highly concentrated. Thus, only the mean parameters of

Yes. First, the experiments below use a diagonal Gaussian for

. Second, Tthe gradient of the objective involves a KL-divergence. Exactly computing this is intractable, but can be approximated with standard tricks from stochastic VI, namely data subsampling and the “reparameterization trick”. Third,

needs to be chosen. The experiments below use the (improper) distribution

is a universal constant chosen for each

to minimize the divergence bound with

is a standard Gaussian. (If you — like I– find this displeasing, see below.)

Are there some more pictures of samples?

Here’s a couple 2-D examples sampling from a “doughnut” distribution and a “three peaks” mixture distribution. Here, the samples are visualized by putting a curve at one standard deviation around the mean. Notice it smoothly becomes more “MCMC-like” as 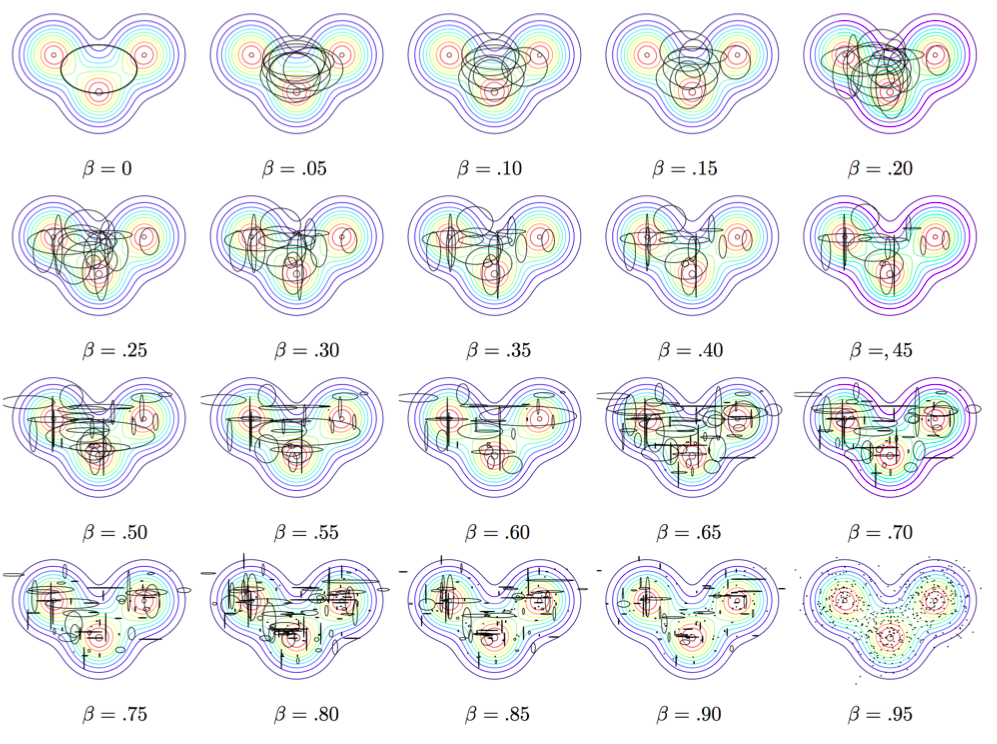 What about “real” problems? Can you show samples there?

Sure, but of course in more than 2 dimensions its hard to show samples. Here are some results sampling from a logistic regression model on the classic ionosphere dataset. As a comparison, I implemented the same model with STAN and ran it a huge amount of time to generate “presumed correct” samples. I then projected all samples to the first two principal components. 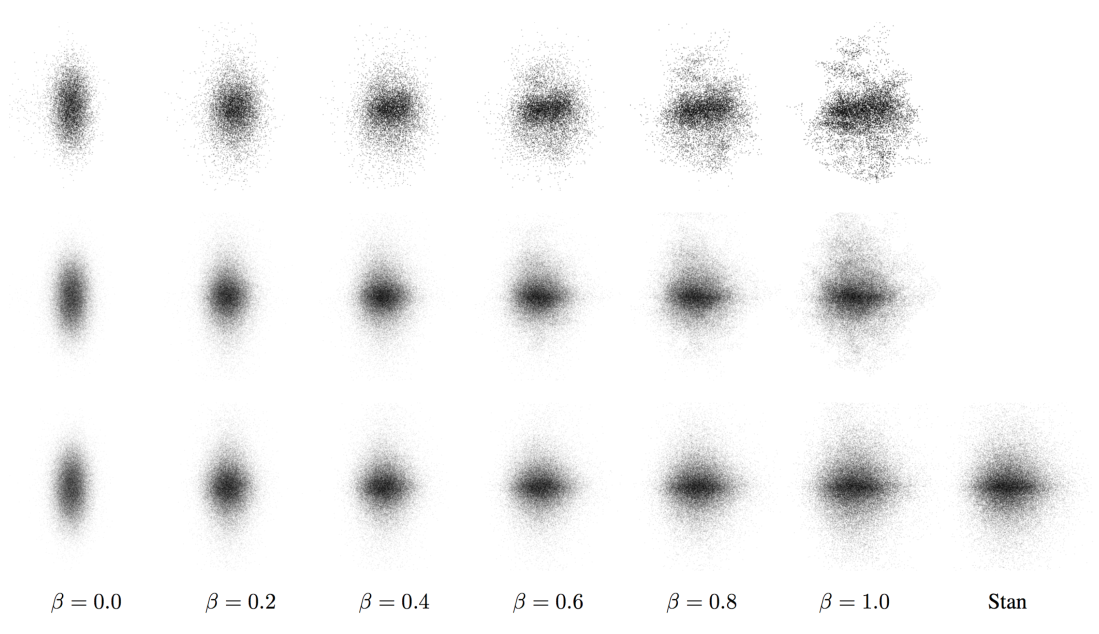 being drawn from each sampled

The top row shows the results after 104 iterations, the middle row after 105 and the bottom row after 106 You can roughly see that for small time horizons you are better off using a lower value of

but for higher time horizons you should use a larger value.

Do you get the desired speed/accuracy tradeoff?

Here, you need to compare the error each value of

creates at each time horizon. This is made difficult by the fact that you also need to select a step-size

and the best step-size changes depending on the time and

. To be as fair as possible, I ran 100 experiments with a range of step-sizes, and averaged the performance. Then, for each value of

and each time horizon, the results are shown with the best timestep. (Actually, this same procedure was used to generate the previous plots of samples as well.)

The above plot shows the error (measured in MMD) on the y axis against time on the x-axis. Note that both axes are logarithmic. There are often several orders of magnitude of time horizons where an intermediate algorithm performs better than pure VI (β=0) or pure MCMC (β=1).

Is there anything that remains unsatisfying about this approach?

. This is a bit disturbing, since this is not an object that “exists” in either the pure MCMC or pure VI worlds. On the other hand, there is a strong argument that it needs to exist here. If you carefully observe

above, you’ll notice that it depends on the particular parameterization of

this would change the marginal density

. That would be truly disturbing, but if

is transformed in the opposite way, it would counteract that. So,

needs to exist to reflect how we’ve parameterized

On the other hand, simply picking a single static distribution

. Using the fact that

you can show that it’s possible to find derivatives of

with respect to the parameters of

online, and thus tighten the bound while the algorithm is running. (I didn’t want to do this in this paper since neither VI nor MCMC do this, and it complicates the interpretation of the experiments.)

Finally, the main question is if this can be extended to other pairs of VI / MCMC algorithms. I actually first derived this algorithm by looking at simple discrete graphical models, e.g. Ising models. There, you can use the algorithms:

You do in fact get a useful hybrid algorithm in the middle. However, the unfortunate reality is that both of the endpoints are considered pretty bad algorithms, so its hard to get too excited about the interpolation.

Finally, do note that there are other ideas out there for combining MCMC and VI. However, these usually fall into the camps of “putting MCMC inside of VI” [7] [8] [9] or “putting VI inside of MCMC” [10], rather than a straight interpolation of the two.